In a continuing effort to make as many household boiler upgrades as possible across the UK, the “solar power with condensing boiler” program is still raising questions on not only its practicality, but also its sustainability for the average UK household.

As the country and individual households attempt to be more accountable for their energy consumption, not making the necessary upgrades in a timely fashion may result in struggling households footing the bill. Despite the offering of many government programs to help with the initial costs, too many households still have their old, inefficient boiler systems. 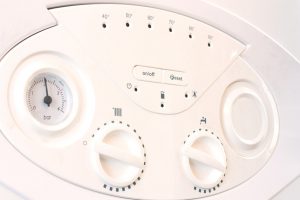 The UK is one country that has been making a conscious effort to reduce their energy consumption beginning at the very place where it hits the hardest, their homes, requiring the ultimate replacement of all antiquated boiler systems with either “A”- rated renewable energy efficient systems or with solar energy systems utilizing condensing boilers, and by providing a number of incentive programs to help defray some of the costs.

A condensing boiler system captures the radiant heat (considered a secondary tier of heat) that is generated from liquid heating sources that would normally be lost through evaporation and fumes. Even with systems that are insulated, there is still some loss of much of this second-tier energy or heat. Bringing this secondary heating source (which is still warm) back into the system will make for a more efficient system, since it will take less energy than bringing cooler, new liquid up to temp.

In 2005, the UK drafted laws strongly recommending that their country’s homeowners convert to a condensing boiler system in their homes, after showing that there would be a significant energy and financial savings to warrant the move. Today, with the push to make the country more energy efficient, the argument is that using a solar powered system in conjunction with condensing boilers would further reduce costs to the homeowner, with the assumption that the boiler is already in place.

For homes that haven’t yet converted, this brings up the point of when the homeowner wants the bitter pill of the cost of doing so: now, or waiting until their current system quits, since these condensing boiler systems with installations and maintenance can be out of reach for many households even without the solar power portion, as conversion programs are ending. Now with the mandatory requirement for all homes to bring them into the D band in energy efficiency, people are wondering if there will be other programs to assist them, or are they left adrift to figure it out by themselves

And what about the solar powered portion of the required heating system? Besides increasing the energy savings an additional 15% over the efficiency of the condensing boiler, and 85% over the traditional standard boiler, the main argument is that the repayment time on the original investment will be shorter than just having the new boiler alone.

So UK families have a new concern that, because it is now law, it is no longer a question of justification of the present cost in relation to future savings. The problem comes down to households that are already facing financial challenges trying to figure out how to comply.